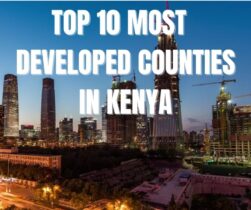 Top 10 Most Developed Counties in Kenya

These are the most developed counties in Kenya.

Kakamega County is well known for its rich cultural diversity and numerous natural attractions. However, what many people do not know is that Kakamega County is also one of the most developed counties in Kenya. It has numerous top hotels, banks, schools, health facilities and other businesses among others. The county is also a major hub for agriculture, which is one of the main economic activities in the area.

Kiambu County is one of the most developed Counties in Kenya. It has numerous top schools, hospitals, universities and other institutions of learning. The county is home to hundreds of the wealthiest individuals in Kenya, with the highest number of millionaires residing in the county. The county also receives a lot of investment from different individuals and corporations.

Mombasa Island is connected by bridges to the mainland and it is thus the main gateway into Kenya for air, sea and road transport. The economy of Mombasa County is largely driven by tourism with several white sandy beaches which attract both local and international tourists as well as tourism-related industries such as hotels, restaurants and transport services relying on tourism for their daily livelihoods.

Nakuru is one of the most developed counties in Kenya. Nakuru town is the fourth-largest urban center in Kenya and it’s also the capital of the county.

The main economic activity of this region is agriculture. Other activities include dairy farming and tourism.

The Kwale County Government has prioritized development in the areas of infrastructure, education and agriculture and among the achievements.

In Agriculture; Kwale county government has provided seeds to over 50,000 farmers and provided equipment such as tractors, maize hullers among others.

In Health; Kwale county government has built a mortuary at Ganze hospital, renovated Ganze District Hospital including the construction of an Accident & Emergency Unit (A&E), maternity ward and operating theatre.

Nairobi County is one of the 47 counties of Kenya which is also Kenya’s capital and largest city.

Nairobi is now home to many numerous companies, financial institutions, and diplomatic missions. In addition to these developments, Nairobi is also an important hub for business in Kenya.

Murang’a is a county in the former Central Province of Kenya. Its capital and largest town is Murang’a.

It is one of Kenya’s most industrialized counties. The Mombasa-Nairobi railway line passes through Murang’a County and the county headquarters are located along the railway line.

This county has rich agricultural resources which are used to develop it economically.

Machakos County was recently declared a city by His Excellency President Uhuru Kenyatta. As such, it is now referred to as Machakos City County but remains one of the most developed counties in Kenya. The county boasts some of the best development projects; these include roads, modern buildings and other infrastructure that has transformed this once sleepy town into a bustling city that continues to grow each passing day.

The county’s economy mainly depends on agriculture and livestock keeping as the primary economic activities. Nyeri County is well known for its cash crops such as coffee and tea. Other crops grown include maize, beans, pigeon peas, potatoes, pyrethrum and vegetables including cabbages and carrots.

Nyandarua is one of the 47 counties in Kenya and it is located in the former Central Province which is largely agricultural with tea, coffee, wheat, potatoes and pyrethrum as the main cash crops.

The county is also enhancing agriculture production by improving agricultural infrastructures such as the provision of water for irrigation, construction of dams and piped water for domestic use. The county has also invested heavily in health facilities through construction and equipping of health facilities at all levels, from level four hospitals to dispensaries, and health centres.

You can also read about: Top 10 Most Developed Industries in Kenya

What You Need to Know about Kenya Counties

Kenya counties are geographical units envisioned by the 2010 Constitution of Kenya as the units of devolved government.

Counties are further sub-divided into sub-counties, which consist of constituencies, which in turn consist of wards.

The counties are also supposed to have a number of departments, which provide services at the county level. Each department is headed by a Chief Officer who reports to an Executive Committee Member who in turn reports to Governor. Each county has a number of constituencies, which are single-member districts that elect Members of Parliament to represent them in the National Assembly

The country’s development and growth are ranked according to the standard of living, literacy rate, economic strength and the per capita income.

Get the latest tech news, tips, and tricks on gadgets, software, websites and many more.

We use cookies on our website to give you the most relevant experience by remembering your preferences and repeat visits. By clicking “Accept All”, you consent to the use of ALL the cookies. However, you may visit "Cookie Settings" to provide a controlled consent.
Cookie SettingsAccept All
Manage consent

This website uses cookies to improve your experience while you navigate through the website. Out of these, the cookies that are categorized as necessary are stored on your browser as they are essential for the working of basic functionalities of the website. We also use third-party cookies that help us analyze and understand how you use this website. These cookies will be stored in your browser only with your consent. You also have the option to opt-out of these cookies. But opting out of some of these cookies may affect your browsing experience.
Necessary Always Enabled
Necessary cookies are absolutely essential for the website to function properly. These cookies ensure basic functionalities and security features of the website, anonymously.
Functional
Functional cookies help to perform certain functionalities like sharing the content of the website on social media platforms, collect feedbacks, and other third-party features.
Performance
Performance cookies are used to understand and analyze the key performance indexes of the website which helps in delivering a better user experience for the visitors.
Analytics
Analytical cookies are used to understand how visitors interact with the website. These cookies help provide information on metrics the number of visitors, bounce rate, traffic source, etc.
Advertisement
Advertisement cookies are used to provide visitors with relevant ads and marketing campaigns. These cookies track visitors across websites and collect information to provide customized ads.
Others
Other uncategorized cookies are those that are being analyzed and have not been classified into a category as yet.
SAVE & ACCEPT