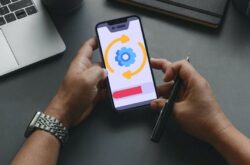 Why Do Your Phone Apps Need To Be Updated?

Developers are always hard at work creating new features and fixing bugs, so it’s important to keep your apps updated.

When you update your apps, they go through a process called certification. Certification is how we make sure that your apps meet Google’s policies and requirements.

There is a huge benefit to keeping your apps up to date.  The latest software version has many advantages that can improve the functionality of your smartphone, lower the risk of being hacked, and even make it faster!

1. Improved security.
Every update will include bug fixes to ensure your data and device are as secure as possible. As cyber-attacks become more sophisticated and common, you need the latest version of your apps to protect you from hackers.

2. Enhancements to the functionality
If you’ve ever used an outdated app, you’ve probably noticed that it doesn’t work as well as the updated version. This is because app developers are constantly making improvements to their products, and they often release new features in their updates.

3. Elimination of bugs or glitches
App developers also use updates to fix bugs, which can cause apps to crash or perform poorly. Un-updated apps are prone to crashing and freezing.

4. Performance improvements.
Updates do not only fix bugs but can also improve performance, especially in older phones where apps run slower than usual. They may even bring new features that could be useful for making your phone run better and prolong its usage.

6. Updates help to ensure that your apps run more smoothly and use less memory. Apps that run more efficiently use less battery power, which can help preserve the life of your phone or tablet’s battery.

If you’re still running a version from three years ago, then you may have older code that’s not as efficient as the updated version.

There are other benefits of updating phone apps you can get if you update your phone regularly.

How To Update Android Apps

To set up updates for individual apps on your android device:

Tap Menu My apps & games. Select the app you want to update. Tap More, Check the box next to “Enable auto-update.” The app will update automatically when updates are available. To turn off automatic updates, uncheck the box.

How To Update iPhone Apps

You can update Apps on your iPhone directly from the App Store, or on your computer by using iTunes.

To update all your apps:

Turn on or turn off automatic downloads.

To update a single app, just tap the Update button next to its name.

To update all the apps, tap Update All.

You can set your iPhone to update apps automatically. When an automatic update is turned on, apps purchased or downloaded from the App Store are automatically updated by default.

App updates often include bug fixes and general improvements to the app to make it run more smoothly. Sometimes, updates also include new features or functionality.

Apps are periodically updated by their developers to fix security holes, enhance functionality, add features, and improve performance. Many apps will alert you when there’s an update available by showing a badge icon on their home screen icon or in the Notification Center. If an app won’t update, delete it and download it from the App Store. If that doesn’t work, try restarting your iPhone, iPad, or iPod touch.

With the ever-changing and rapidly advancing world of technology, you need to benefit from these advances, too. That’s why updating your apps is a good idea. Whether it’s an app on your phone or an app on your computer, when it’s outdated, it often doesn’t function as intended.

Because of this, you might need to get the latest update just so it will work properly.

You can also read about: Android Vs iPhone- Which One is Better Mobile